Tobacco has a rich history in the Dominican Republic that dates back to the Spanish arriving in 1492 and now, by some estimates, outputs as much as 350 million cigars per year. 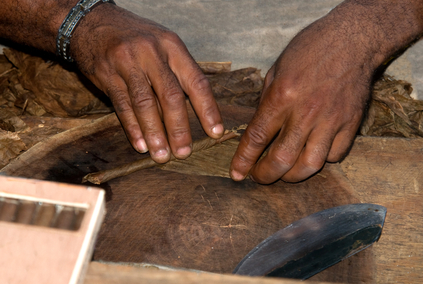 The nationalization of the Cuban cigar industry combined with the US embargo saw a great migration of cigar makers to the Dominican Republic.

For the most part, Dominican cigars are not known to be as strong as their Cuban counterparts. They tend to be mild to medium in profile but excel in subtle aromas, color, and price point.

Today some of the top cigar factories in the world call the Dominican Republic “home.”

While most of the cigars are blended and manufactured in three areas: La Romana, Santiago, and Tamboril, the primary growing region is near Santiago (Yaque valley and Cibao River valley).

It wasn’t until the 1990’s that the Dominican Republic produced consistent quality wrapper leaves. Until that time, it produced largely filler and binder leaves (importing wrappers from other countries).

Although very difficult to generalize, Dominican cigars often have more “earth tones” and “floral notes” when compared to some cigars blended in other countries.